Real-life couple Kopae and McCaskill play husband and wife Nellie and Charlie Miller in Nancy Brunning’s award-winning play about a Māori family at a social and cultural crossroads in the 1970s and 80s.

Kali Kopae is family matriarch Nellie, at odds with her husband Charlie and unable to agree with him on what shape their family’s future will take.

Charlie, played by Jamie McCaskill, likes life the way it is – a steady job, healthy kids and good mates in small town central North Island. But try as he might he can’t stop the irreversible change that’s about to to sweep his family up.

Aroha White, Kura Forrester, Manuel Solomon, Ngakopa Volkering and Amanda Noblett play Nellie and Charlie’s children: five hard case teens who, fed up with their parents’ silences, secrets and quarrels pack their bags and take off in search of answers.

Written and directed by Nancy Brunning, Hīkoi was named Best Play by a Māori Playwright at the 2014 Adam NZ Play Awards.

Hīkoi is co-produced by  Auckland Arts Festival and Hāpai Productions.

Auckland Arts Festival 2015 will be the seventh biennial Festival since 2003.

Nearly 1.2 million people have attended the Festivals to date.

With support from Creative New Zealand and Four Winds Foundation. 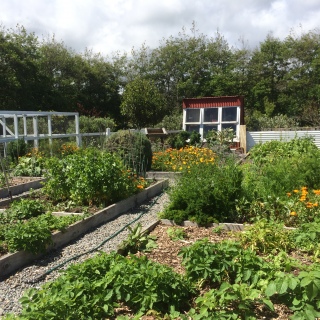 The rain has come and my garden is drinking at great speed. The courgettes, pumpkins and other vegetables... read more